A JOIN Alum on Values and a Growing Multiracial Family 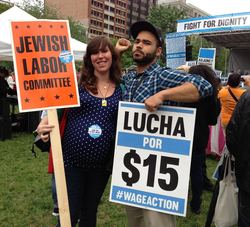 Union organizer and JOIN alum Corey Hope Leaffer wrote recently for the Kolot Project blog, tackling personal and political issues: being a Jew in the labor movement, being in a multiracial family and looking forward to the birth of her new son. Corey worked with the North Shore Labor Council during her time with JOIN.

“For the last 10 years I have worked professionally in the labor movement but I got active in worker rights when I was in college. As a child I attended Jewish day school and that is where I learned the treasures of my Jewish religion and culture.I attended Brandeis and my Jewish identity grew. After I graduated, I became a fellow at the Jewish Organizing Initiative Network (JOIN) where I worked at the North Shore Labor Council. That was an important step in bringing my Jewish values together with my commitment to the labor movement…

“I’ve been spending a lot of time lately thinking about new difficult situations I will soon be challenged with in life. In a few weeks, I will become a mother for the first time. My fiancée Zev and I are expecting a son any day now. Zev is black and Jewish and I am white and Jewish and we are both union organizers for SEIU. Our son will be multi-racial and he’ll be Jewish and he’ll grow up with his parents working in the labor movement. He will be born into a complicated world with a complicated and beautiful history from both sides of his heritage.”

This entry was posted in Alumni At Large, From the Field, General, Success Stories. Bookmark the permalink.